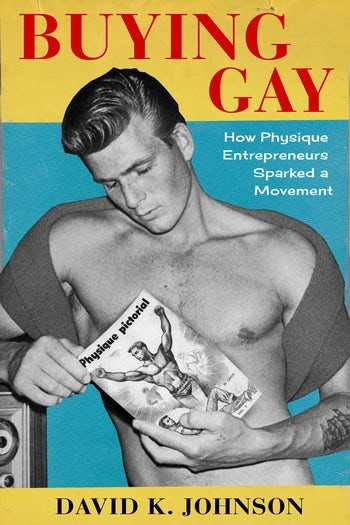 Buying Gay: How Physique Entrepreneurs Sparked a Movement by David K. Johnson was a brief academic read about the role physique magazines played in gay liberation pre-Stonewall. Its brevity did not belie its intellectual heft: 236 pages followed by 49 pages of endnotes made for a thoroughly researched read which propelled me after each chapter to search on-line for the source material. With dozens of endnotes (and two of the seven chapters had over a hundred endnotes each) I saved referring to all of them until I had finished each chapter.

Johnson wrote about the history of physique magazines--as distinct from workout or bodybuilding magazines--from post-WWII to the seventies. At first these magazines, such as Physique Pictorial, were marketed under the ostensible purpose for artists specializing in figure drawing. Buff satyrs wearing nothing but posing pouches filled these magazines at first. Reader surveys led to more features such as personal ads, mailing lists and book distribution. To postwar gay men, these magazines served the same purpose as bars and Grindr do today. Johnson profiled the earliest magazine editors, such as Bob Mizer, and their relentless pursuit by the US Postal Service for allegedly using the mails to distribute obscenity. The physique magazines were challenged also for printing mailing lists and catalogues of books dealing with homosexuality. If there was ever a hero of freedom of expression--regardless of sex or sexual orientation--it was Mizer. He was an out and proud gay man decades before Stonewall who was not afraid of tackling the US government in court. His victories outnumbered his defeats and inspired later publishers to be fearless before the courts. Even after the courts had declared that the images were not obscene, publishers still found themselves before judge and jury. It became very clear that the images themselves weren't the issue: the courts were in fact putting the intended magazine audience on trial by trying to suppress LGBT forms of expression. It was homophobia pure and simple.

Physique magazines and homophile organizations advanced the causes that the Stonewall riots continued to fight for. Johnson's level of detail, from interviewing magazine publishers and customers, finding court transcripts and the magazines themselves produced a work like no other in LGBT history. While an academic read true to the core, Buying Gay was nevertheless a page-turner.

Regardless of the state of my poor eyesight, I don't think anyone would have been able to read some of the reproduced magazine pages within the text. Shrunk to fit standard hardcover page dimensions, the text accompanying the physique images or magazine ads required me to use a magnifying glass in every case. (Not that there was anything disconcerting about looking at nearly nude buff men with a magnifying glass.) For an academic read there were a handful of spelling errors, the most striking was referring to Tom of Finland artist Touko Laaksonen as "Finish".
Collapse